Team Implementation Checklist (TIC)
The TIC is a progress monitoring tool used to assess the implementation for all students (Tier 1). It is recommended that the TIC assessment be done 3-4 times per year to mark progress. From pbis.org.

Tiered Fidelity Inventory (TFI)
The TFI measures PBIS at all three tiers and is used to create a corresponding action plan. From pbis.org.

Schedule a Behavior Manager demo on our calendar

Proactive behavior management, the kind advocated in PBIS, will do a great deal to reduce misbehavior in your school. However, students will continue to misbehave. Unfortunately, many books on PBIS, in their enthusiasm for the very real benefits of the approach, give the impression that PBIS will completely solve your school's behavior problems. It won't.

We have discussed expectations, rules and procedures along with positive feedback and rewards for good behavior. That is the basic level of PBIS. PBIS is implemented as a three tier system. Tier 1, the Universal tier, is what we've just described: being proactive to prevent misbehavior by teaching expected behaviors. Most students will respond and behave as expected. Some reminders and reteaching will be required but not much for most students.

When consequences are assigned for misbehavior, it is best when they teach or reteach the expectations of the school. It is also best to minimize out-of-placement consequences. When students miss classroom instruction, they fall further behind and are more likely, not less, to misbehave again.

Consider consequences that are appropriate to the function of the student's behavior and that help the student behave better in the future such as Behavior Questionnaires, Check In/Check Out, social skills instruction and restorative discipline.

Lots of things can result in student misbehavior. A few are listed below. Proactive behavior management will help reduce misbehavior even when some of these motivations apply.

Misbehavior will appear in the school and you must be prepared to deal with it.

Is the goal to punish or to improve behavior?

The most commonly used consequences for misbehavior is an escalating set of actions that that have been imposed on the student, which he dislikes. Most schools use detention, loss of privileges, in-school suspension, out of school suspension and expulsion. Since the student dislikes the action, the assumption is that she will change her behavior to avoid it in the future. A psychologist might call it a behavior reductive intervention. Others might call it a punishment. The benefit of these common punishments is that they are a way to take immediate action on a misbehavior and get an immediate result.

There a several disadvantages to managing student behavior with punishments.

How to get away from punishments

Significant progress is made in getting away from punishments when we adopt a proactive approach to behavior management: expectations, rules and procedures. For the misbehaviors that still occur (and some will, although not as many), we can change the student's perception of the consequence and create better consequences.

Consequences should never be assigned in anger. If there is anger, revenge or vindication or an expression of the greater power that the school has versus the student, the student is likely to see that emotion and not consider the lesson behind the consequence.

Consequences should be seen as a mechanism for learning, not suffering. We want the student to learn to solve her own problems. If Janet has been involved in outbursts with another girl, we can approach this as a problem to be solved rather than a misbehavior to be punished. After Janet has given her side of the story of the incident, the teacher can, rather than imposing a punishment, ask something like "What are you going to do?" or "How will you make amends?" or "What do you think I should do?" Asking questions like these does two things. It shifts the teacher's task from picking a punishment to solving a problem. It also shifts the responsibility for solving the problem on the student, not on the teacher.

Give the student some degree of control. If you've asked the student for ideas for solving his problem and he doesn't offer any, you can still give him some control. Give a list of a few consequences for him to choose one. Even that much control moves him closer to perceiving the problem-solving as his responsibility.

In addition to improving the student's attitude toward consequences, we can assign different consequences that are more effective.

Check In/Check Out is an intervention that has received a lot of research attention. It has been found to be very effective in teaching students who have had difficulty following the expectations, rules and procedures. It consists of evaluating the student's behavior in each class throughout the day, reviewing it quickly at the end of the day (that's the check out), then reviewing it with the student's parents at night and returning a card signed by a parent to the school in the morning (that's the check in). We'll describe it in more detail in the context of Check In/Check Out in Behavior Manager below.

Check In/Check Out has proved to be effective for students from elementary through high school. It's generally offered as an intervention to students who have not responded to simpler interventions for disruptions, talking out, getting out of one's seat and disrespect. It benefits the student by focusing on behavior expectations in each period of the day and getting attention and encouragement from teachers throughout the day.

Check In/Check Out is often used for repeat offenders so it can be an effective replacement for suspension. It has several significant advantages over suspensions. Most important, the student continues to stay in class so instruction time is not lost. Second, she gets direct feedback throughout the day and day after day on her problem behavior, so it helps in actually solving behavior problems. Third, it is not a punishment and should not be presented as a punishment. It is an intervention to help make behavior changes so it is less likely to be resented by the student.

How does Check In/Check Out work in Behavior Manager? 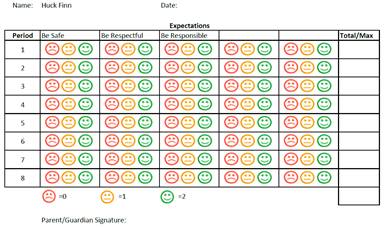 Here's how Check In/Check Out (CICO) works. First, the paper version. The student checks in in the morning and gets a card like the one above. If he has one from yesterday that has been signed by a parent, he turns it in. Note that the schoolwide expectations are at the top of each column. Class periods are listed along the left side. Through the day, the teacher in each period will rate the student's behavior for each expectation. Recall that in the rule matrix, those expectations are broken down into specific rules.

In each class period there is a chance for a brief interaction between student and teacher with a chance for praise or reminders of rules. In some cases, teachers may choose to create expectations specific to this student.

At the end of the day, the student has a brief meeting with a counselor or some other designated staff member for a quick recap of the day. Scores are entered into a database. This is Check Out. He then takes the card home, has it signed by a parent and brings it back the next morning.

The recorded data is used to track progress. Students are given a goal such as an overall score of 75% or more of the maximum total score. As the data shows progress, the goal is increased.

In time, they may switch to having the student evaluate his own behavior and just check with the teacher on whether she agrees. Eventually, the behavior improves and the CICO process is stopped.

Behavior Manager improves on this paper process by making it electronic. We can deal with the paper cards and data entry at the end of the day, but it is simpler if it's all online.

The image on the right shows the scoring page. Teachers click scores (0, 1 or 2 for middle schoolers and high schoolers, smiley faces for elementary). They can also enter comments of two kinds: comments for students and parents and comments (with the light blue background) meant for internal use.

Scores are tallied and percentages calculated. A graph shows progress and compares scores to goals. Daily score sheets can be digitally signed through the parent portal. The blue internal comments are not presented on the portal for either students or parents.

And, if we are to be honest, problems in classrooms are often due to another social skills deficit, that of teachers. When a teacher loses his temper or engages in a power struggle with a student or reacts to a student's misbehavior with ridicule, he is causing additional problems that could be avoided with appropriate social skills.